This week we’ll be introducing Donna Gray, an experienced screen and stage actor and masters graduate from Drama Centre CSM. Donna has been playing Sybil in Faulty Towers The Dining Experience for just over a year now and has toured around the world to Barbados, Portugal, Ireland and our London West End residency at The Charing Cross Hotel.

A: Travelling around the world with the show. My most recent highlight was performing alfresco on the veranda of Holders House in Barbados for the Holders Season 2013. We were on the bill amongst acts like Paul Merton and Russell Watson and we did two sell out shows overlooking the Caribbean Sea!

Apart from the travelling – whacking Basil around the head with a tray of nuts every night is always a highlight! 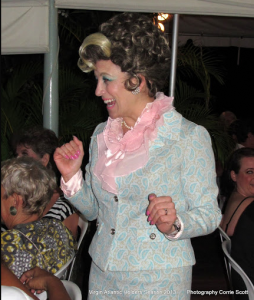 Q2: Describe yourself in 3 words.

A: Driven, impatient and blonde!

A: There once was a man who laughed like a performing seal throughout the night. During an important silence in the show – where Sybil turns and catches Basil out – he was sitting right under my nose and as I was glaring at Basil he burst out laughing, or should I say barking! The rest of the audience and myself had to just turn and watch him. It was hard to contain myself but Sybil calmly turned to him and said “Are we related?” then laughed in her usual machine-gunning seal way herself!   As I left the room the corners of my mouth started to turn up uncontrollably and on reaching the kitchen I just fell about laughing! (You had to be there!)

A: Scarily, there are quite a few!  I like to chat,  I have tendencies to say ‘I know’ and ‘Really?’ I have big hair  and I love a matching two piece!

A: A Dragon of course! Or if you mean a real one, maybe a Parrot: I talk too much and preen myself (a bit like Sybil!). Or a Sheep because I’m mutton dressed up as lamb!  Or a Golden Retriever as I’m very blonde and eager to please!

Jack (Basil) because he always comes with gifts of cheese or chocolate for after show treats and he plays the Beatles on his iPod.

Brian (Manuel) because we have a ritual of singing Bohemian Rhapsody as loud as we can to warm up pre-show.

Paul (Basil) because he never fails to have a story of the day to share with us and his determination to get the live match on his iPad gives a good energy in the room.

A: “Linda’s Veggie Sausages to the rescue #cupboardsarebare #lunch #hurryupandcook”

A: A bag of nuts and raisins and enough money for a skinny latte.

A: I can still do the splits!

If you want to see Donna in action, in both Faulty Towers and other clips, check out her 2013 Showreel: